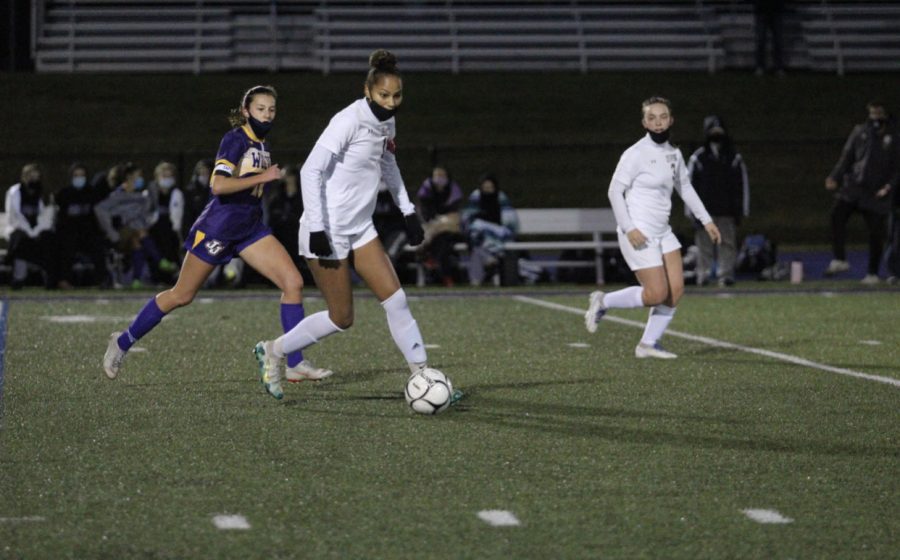 Marlee Potillo is The Current’s December’s athlete of the month. She served as one of the key contributors on the Ossining girls’ varsity team, ending the season with 6 goals and 3 assists (9 total points) and being one of the team leaders. The Current asked her about her season and future. When asked about her journey to this point, she responded, “Thank you so much, it’s always such an honor being recognized for my hardwork and dedication to this sport. I have been playing soccer since I was 4 years old, so I can imagine I am much better than I was 13 years ago. I believe my overall knowledge of soccer has changed. The way I see the sport, and the way I feel about the sport when I am playing has changed significantly. In 8th grade I decided to stop participating in other sports such as swimming/diving and gymnastics to solely focus on soccer. I realized that this is the path I wanted to pursue and the goal was to play in college.”

Her thirteen-year journey carried her from elementary-level soccer to collegiate status. She said, “My parents put me in AYSO when I was 4 years old, fell in love, and loved it ever since. I went from AYSO to MUNAY which was a big jump for me, then to a club called New York Xtreme FC which was an even bigger jump because it was a real club, versing teams from all around the region. I then decided I wanted to play at an even higher level and chose to switch to World Class FC which is partnered with the very famous New York City Football Club (NYCFC) that plays at the Yankee Stadium. Getting to where I am wasn’t easy, I train for multiple hours a week no matter the weather conditions, I put hard work in and get the results I want out of it.”

The goal of a college career has become a reality. She stated, “Yes, I do plan on playing at the collegiate level. I am actually committed to play at Bloomsburg University, a public division 2 university located in Pennsylvania. I could not imagine myself anywhere else and am super stoked to attend fall of 2021. This was my goal, and I am super excited to have achieved it and I won’t be settling. I will keep pushing and training myself everyday so I am stronger, faster, smarter, and college ready.”

With all the uncertainties of the implications of the COVID-19 pandemic surrounding sports, there have been many changes in the way the game is played and practiced in order to create a safe environment for student athletes. It is hard for many to adjust, and takes away from how the game should be played. Potillo was candid in her opinion on the season with the impacts of the COVID-19 pandemic, “I won’t lie, COVID-19 definitely ruined some part of my senior year not just academically but athletically as well. What I am grateful for is the fact that we were even able to get a season in, I am so thankful that our season was not canceled this fall like other sports. This soccer season definitely had a different format from the previous years, we had to wear masks while practicing and playing in games, we had frequent temperature checks. Personally, I thought wearing masks was ridiculous, we have less of a chance of spreading COVID-19 outdoors than indoor sports. Although, I do understand why they made us wear them. Mid-season I adjusted to wearing the mask and eventually became used to it. I would rather take all of these precautions than not have a senior season.”

As one of the team’s best players, Potillo used her leadership skills to set goals and push the team to their limits. Beginning her varsity career in eighth grade, she eventually became the captain of the team. When asked about being a team captain Potillo responded, “Being named captain definitely put some kind of pressure on me but I knew I would be able to handle it because five years later I should know what is expected of me. One of my biggest goals was being a good leader for the team and making sure this team was more than a team but a family, especially throughout these hard times. I know me and my teammates all wanted to be league champs this year, unfortunately this didn’t happen, but we got pretty close. I am so proud of our team and I know the varsity girls soccer team is filled with talent and potential. This program will go so far within the next few years, I am so happy to be leaving on a high note.” Her leadership proved vital to the team throughout the years, and with game-winning goals and excellent play, has helped power the team to success.

When asked if she had anything else to add, Potillo took time to thank those who have aided her in her journey as a soccer player. She stated, “I am super grateful for anyone who has supported me through this whole process, specifically my family, they sacrificed so much for me and I am happy I’m making them proud. Never take for granted the support system you have, half of the time they are the reason why you got to where you are at this very moment. If you find a true passion for something, never stop doing it.”