The Clock is Ticking on Climate Change, What are We Doing to Stop it? 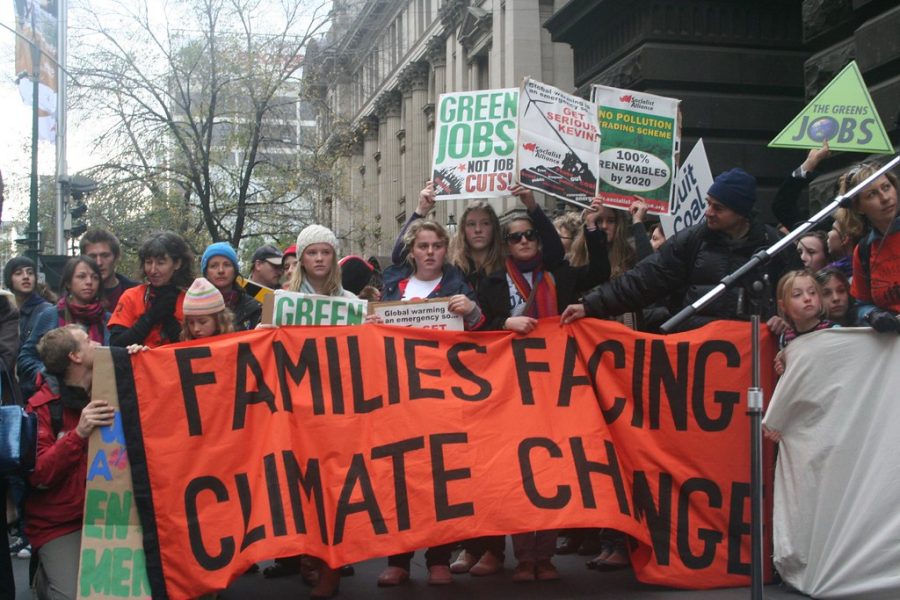 Over the past few years, understanding and action taken about climate change has grown dramatically, despite attempts to undermine science. Last September, millions of people, many of whom were kids, took to the streets all over the world to strike against climate change, fighting for a better future. This year, due to the pandemic, global mobilization about addressing climate change took on a different form.

The Metronome, a public art project in New York City, has always been confusing to those who don’t understand it. Some people thought the clock measured the United States’s debt while others thought it was recording the ever growing world population. The giant clock overlooking Union Square, while not expressing time in a conventional way, was, however, telling time.

On September 19th, a powerful message was displayed on the clock in honor of climate week: “The Earth has a deadline. Let’s make it a lifeline.” Based on calculations done by researchers from the Mercator Research Institute on Global Commons and Climate Change in Berlin, the countdown placed on the face of the Metronome—displayed in red numbers—became a physical reminder of the climate crisis. 7:103:15:40:09, representing the years, days, hours, minutes, and seconds until the world burns through its “cabron budget,” soon became yet another symbol of a world and environment in crisis.

It is expected that an increase of global temperatures by 1.5°C will have deleterious effects on the environment, causing drought, famine, floods, and contributing to the destabilization of volatile regions. Even though the world’s carbon “budget” (the quantity of carbon dioxide that can be released into the atmosphere before global temperatures reach 1.5°C above pre-industrial revolution temperatures) doesn’t run out for another seven years, the world has been forced to deal with such consequences nonetheless— the wildfires raging on the west coast are proof of that.

Many governments, however, have not been taking the necessary steps to address climate change, the United States included. The current administration has rolled back, or is in the process of rolling back, ninety nine environmental rules. The Trump administration has relaxed and replaced rules that cut back on emissions, open public lands for extraction of oil, coal, and gas, and have withdrawn the United States from the Paris Climate Agreement. Trump’s pick to replace the late Ruth Bader Gisburg, Amy Coney, has called climate change “ politically controversial.” While the issue of climate change has become politically controversial, it shouldn’t have, as it is an issue we all face. It doesn’t care about how you vote or what party you belong to, it affects us all. Presidential candidate and former vice president of the United States, Joe Biden, has recently revealed his own plan for climate action. The stark difference between Biden’s plan and Trump’s plan is alarming. If elected, Biden’s administration plans on reentering the Paris Climate Agreement. Biden also plans for the United States to be completely energy efficient by 2050, using renewable energy sources to create new jobs. His plan also focuses on rallying other countries into climate action. Even though the United States is a major contributor to global emissions, we are not the only ones. Though the plan isn’t as progressive as some had hoped, it is a start.

Hope is crucial when facing serious issues, as it is what drives and unites all communities. While the climate strikes that occurred last year were a result of inaction and neglect on the part of political leaders, they also represented a shift in politics and society as the protests were organized and attended mostly by young people. The climate clock in Times Square reads a number that elicits fear and despair in many people but it also represents hope, the coming of age of a new generation of tenacious youth, and is symbolic of life as much as it is of death.

The climate clock, while representative of the precious little time we have left, is also symbolic of life, progress, and a second chance. Although it wasn’t shown on the metronome itself, the green number represents the percentage of energy contributed by renewable sources. Simply stated, we will have succeeded if the green number reaches 100% before the red number reaches 0.

Political inaction, while having detrimental effects on the environment, has led to the resurgence of youth activism and many climate organizations are now led by the younger generation. The issue of climate change has brought out the best in the youth, showing our ability to come together.  We are a strong generation, resilient and resolute. Despite our inability to vote, we can still make a difference by drawing attention to the future that we want, a future where climate change is an issue of the past because governments took action against it.

Action on climate change has been undermined by the pandemic, which has shifted much of the international community’s attention to stopping the spread of COVID-19. Climate activists are still out there fighting, though, even if their ways of communicating their message have radically changed. Even if passers by in Union Square did not understand the countdown above them, the display was still important. The clock was written about in papers like The New York Times and The Washington Post. People who never got a chance to see the Metronome’s warning in person, like me, still heard about it. Every act, both large and small, in this fight for climate justice has an impact. Though large scale protests make international headlines, the simple act of turning off the lights is also a move towards a better future.