The Life and Death of Malcolm X: Remembering a Civil Rights Icon 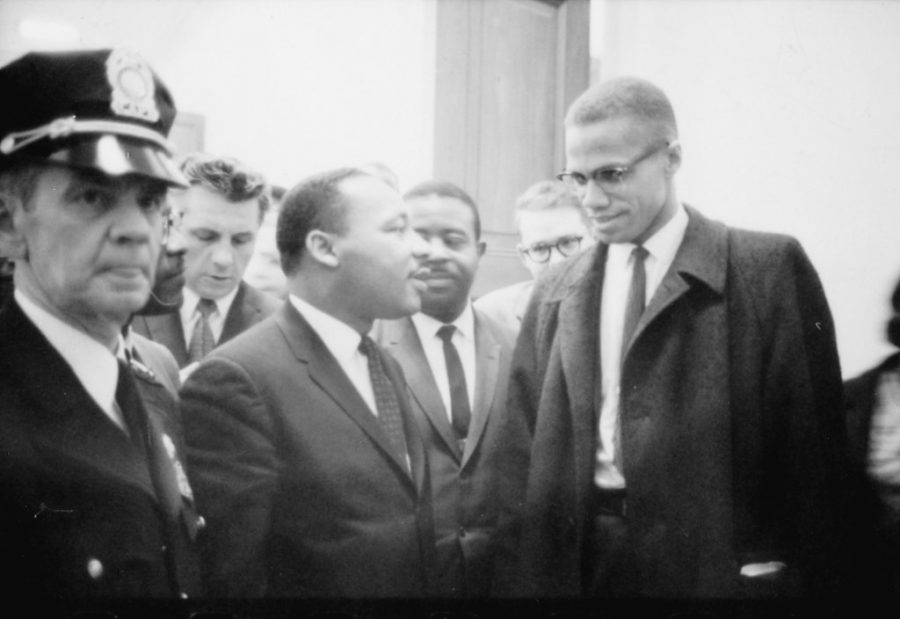 On February 21st, 1965, Malcolm X, regarded by many as one of the most significant and controversial civil rights activists of the 20th century, was assassinated in a string of violence against civil rights leaders that ripped across the country. His posthumous autobiography, written in collaboration with journalist Alex Haley, made him an ideological hero for many. Malcolm X was unlike many activists of his time, advocating for self-defense and racial justice by “any means necessary” as well as racial separatism. Playing a significant role in the Nation of Islam, a religious and social movement founded by Wallace Fard Muhammad in 1930, Malcolm X was able to expand the group from just a few hundred members to nearly 75,000 members in just over a decade.

Malcolm X was born Malcolm Little on May 19th, 1925 in Omaha, Nebraska to Reverend Earl Little and Louise Little. When he was three, Malcolm X’s family moved to a primarily white neighborhood in Lansing, Michigan. In Lansing, the Littles were sued for eviction due to a covenant restricting non-Caucasians from living in the area. During the Littles’ fight to stay in their neighborhood, a local white supremacist group firebombed their home, and Malcolm X would later write that not a single fire truck arrived at the scene. In 1931, when Malcolm X was only six-years-old, his father, a minister for the Baptist Church and early supporter of Black nationalist leader Marcus Garvey, was murdered in what police called a “streetcar accident.” Malcolm X suspected it was not accidental, as was suggested by the police, but instead had been engineered by the Ku Klux Klan. The death of Little, who was the primary breadwinner in the household, left Malcolm X’s family struggling to put food on the table. When he was older, Malcolm X would describe how his mother would pick dandelion greens from the driveway to help feed her children.

Despite his exceptional grades, Malcolm X dropped out of school after his teacher told him to pursue a vocation in carpentry instead of a career in law. A rebellious adolescent, Malcolm X moved from a juvenile home in Mason, Michigan, to his half-sister’s residence in the Roxbury section of Boston, Massachusetts, and was described as a low-level leader of a drug-dealing organization and street hustlers. Malcolm X was eventually charged with robbery in 1946 and sentenced to eight to ten years in a Massachusetts correctional facility. He would ultimately serve six and a half years of his ten year sentence. In his autobiography, Malcolm X would describe the six and a half years he spent in prison as “the most decisive in his life.”

While serving his prison sentence, Malcolm X converted to Islam and became a devout Muslim, renouncing tobacco, gambling, alcohol, and pork as mandated by the Qu’ran. After he was granted parole in 1952, Malcolm X corresponded with political activist and fellow Muslim Elijah Muhammad. It was through this correspondence that Malcolm X decided to change his name from Malcolm Little to Malcolm X; the “X” symbolizing the renouncement of his former slave name (Little) and an acknowledgment of his ancestral African name which he will never know.

While living in Chicago, Malcolm X devoted his time to public speaking. His natural affinity for public speaking, coupled with his charisma, drew the particular interest of Elijah Muhammad, the leader of the Nation of Islam, who advised Malcolm X to open mosques in Boston, New York City, and Detroit. Malcolm X soon proved to be an eloquent and powerful writer for the civil rights movement, creating a newspaper titled Muhammad Speaks. In this publication, Malcolm X called for changes such as black separatism and other doctrines many regarded as radical. Due to his rising popularity and growing audience, the FBI began monitoring him by 1954. Malcolm X’s ideologies and rallies had been particularly noted for how they contradicted those of another famous civil rights advocate, Dr. Martin Luther King Jr., who called for change through an exclusively peaceful process. While these two figures had an often turbulent alliance, there remained occasions and issues on which the two men were more closely aligned. By 1957, after operating as chief minister for Mosque No.7 in Harlem, Malcolm X became the Nation of Islam’s national representative, serving with this title for the next three years. As second in command, Malcolm X was only outranked by the Nation of Islam’s supreme leader, Elijah Muhammad.

The documentary “The Hate That Hate Produced,” released in 1959, brought Malcolm X more fully into the public eye and catapulted the Nation of Islam to international recognition. Shortly after the documentary’s release, Malcolm X met with leaders from the Middle East and Africa at the United Nations in 1960 and Fidel Castro in September of that same year. In 1962, Malcolm X befriended famous boxer Cassius Clay. This friendship would inspire Clay to join the Nation of Islam and change his name to Muhammad Ali. Scrutiny over Malcolm X’s statements [he described a plane crash that had killed over one hundred mostly white passengers as a “very beautiful thing” (Business Insider) and President John F. Kennedy’s assassination as “the chickens coming home to roost” (PBS)] soon increased on both a national and international level. As a result of critical statements he made about President Kennedy soon after his death, Malcolm X was served a three-month silence penalty by Elijah Muhammad, a sign of the pair’s relationship’s first cracks. This relationship eventually came to an end after Malcolm X discovered a series of affairs Muhammad had had with several women.

In 1963, Malcolm X decided to temporarily leave the United States and take a sabbatical from the temple to embark on a pilgrimage to Mecca. During the Hajj, Malcolm X saw Muslims of all different races and ethnicities peacefully coexisting. It would be there, on the Hajj, that Malcolm X would abandon and disavow his philosophies on racial separatism. In March the next year, Malcolm X formally left the Nation of Islam entirely, claiming it was corrupted by greed and that Elijah Muhammad was envious of his growing notoriety, changing his name to El-Hajj Malik El-Shabazz. During the summer of 1964, Malcolm X would establish the Organization of Afro-American Unity, declaring that instead of white people being the enemy, it was racism. His abandonment of the Nation of Islam cost Malcolm X many of his closest friendships, including Muhammad Ali’s. After Malcolm X’s death, Ali would say that ignoring Malcolm X was the “biggest mistake of his life.” Despite losing some friends, Malcolm X gained new friendships and strengthened his relationship with Martin Luther King Jr., whom Malcolm X had become increasingly supportive of.

Malcolm X received an increasing number of death threats leading up to his assassination in February of 1965, and was nearly killed in a firebombing incident exactly a week before his death. Neither Malcolm X or his children were harmed in this incident. These experiences did not, however, deter Malcolm X, as he continued publicly speaking without police protection.

On February 21st, 1965, Malcolm X was scheduled to speak at the Audubon Ballroom in upper Harlem. Before the event, Malcolm X told his staff  not to check the guests for guns, a standard procedure for such events. While Malcolm X delivered his lecture, he was shot fifteen times. His wife of seven years, Betty Shabazz, and their six daughters survived him. Malcolm X’s funeral was held just six days after his death in Harlem at the Faith Temple of God in Christ. It is estimated that between 15,000 and 30,000 people arrived at the public viewing of his body.

Muhammad Abdul Aziz, Khalil Islam, and Mujahid Abdul Halim were convicted of the murder of Malcolm X in March of 1966. Islam and Aziz would go on to protest their conviction and maintained their innocence. Conspiracies about who killed Malcolm X and their motives in killing him continue today, with some pointing to a telegram by J. Edgar Hoover that read, “Do something about Malcolm X, enough with this black violence in New York.” and comments made by President Lyndon Johnson in a meeting, “we would not have a problem if we could get those two guys [Martin Luther King Jr. and Malcolm X] fighting if we can get them to kill one another off” as indications of a more complex story behind the assassination of Malcolm X. In February of 2020, 55 years after his death, the Manhattan District Attorney’s office deliberated whether to reopen Malcolm X’s murder case in response to pressures from his family and new evidence revealing the possible conspiracy between the NYPD and FBI to murder Malcolm X. The Justice Department had previously declined to reopen Malcolm X’s murder case back in 2011.

Although Malcolm X was killed at 39, the legacy of his work has transcended time. The life of advocacy Malcolm X led, and the speeches he gave, helped change the course of American history. In the similar calls for racial equality seen across America today, Malcolm X’s words continue to be used, proof that his legacy and his work far outlived the masses.