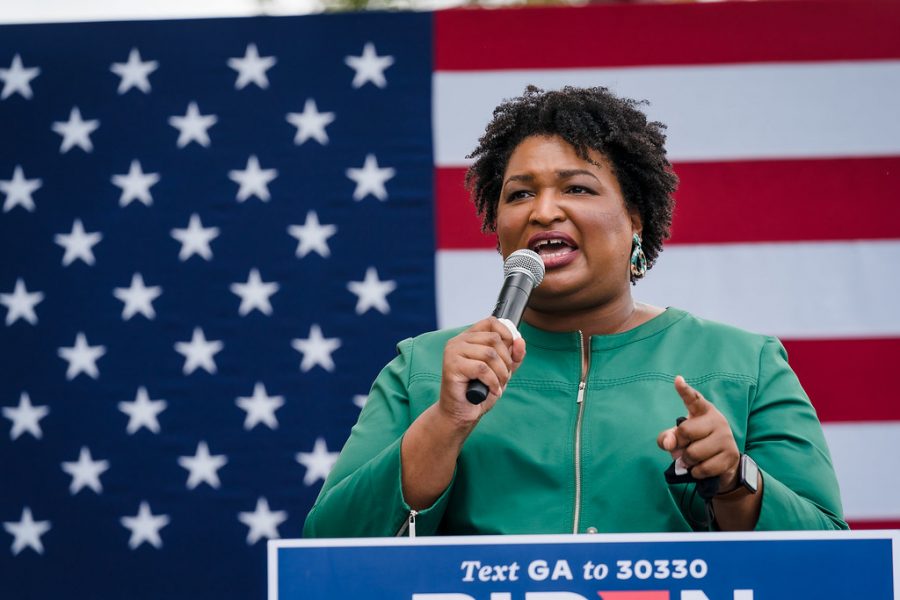 After a series of victories for the Democratic Party in the 2020 elections, Stacey Abrams has been recognized as a crucial part of the team that helped yield such historic election results. Prior to the election, Abrams made waves with her work against racial voter suppression in her home state of Georgia and beyond, and now holds a fresh, influential voice in American politics as a result of her work in the lead up to the 2020 elections.

Born in Wisconsin in 1973, Abrams was raised in Mississippi, and eventually moved to Atlanta, Georgia during her high school years so her parents could study to become Methodist ministers. Abrams grew up with five siblings and was a part of Girl Scouts, where she was scrutinized by other troops because of her race. Abrams was encouraged by her family to work hard in school and she went on to graduate from Avondale High School first in her class and received her bachelor’s degree in Interdisciplinary Studies at Spelman College. From there, Abrams earned a Master of Public Affairs at the University of Texas and a law degree from Yale University.

After finishing her education, Abrams went on to practice tax law in Georgia and authored eight novels between her third year of Yale law school and 2009 with her most recent novel While Just Sleeps, set to be released in the spring of this year. Abrams also kick-started two businesses, one selling water bottles to assist mothers in mixing baby formula on-the-go, and the other working as a small business payment company. Eventually, after gaining experience in several different career paths, Abrams ran for the Georgia State House of Representatives in 2006 and won an open seat. Three years into her term, Abrams was elected as the House minority leader and held together Georgian Democrats as the first caucus-leading woman in both the Congress and the House. Abrams succeeded in restricting Republican efforts to control reproductive rights and raise taxes for low-income families. During her term, Abrams earned many awards, including the John F. Kennedy New Frontier award in 2012. Her work on funding public transportation and prison reform in Georgia are high notes in her time as minority leader.

In 2018, Abrams made history with her campaign to run for Georgia Governor. Running against Georgia’s Secretary of State Republican Brian Kemp, Abrams lost the election by about 50,000 votes and publicly challenged the results due to Kemp’s history of throwing out voter registrations throughout his term. Similar to her 2016 gubernatorial race against Kemp, Abrams refused to concede her second race for governor due to alleged uncounted absentee ballots in several counties. While Kemp was declared the winner of the election, Abrams’ efforts paved the way for future work to be done combatting voter suppression in her state and throughout the country.

At the news of her loss, Abrams announced her new initiative to fight for accurate voter representation in Georgia. Following her announcement, Abrams created Fair Fight, an organization that works to “promote fair elections in Georgia and around the country, to encourage voter participation in elections, and to educate voters about elections and their voting rights.” Since then, Abrams has strived to promote voter registration for people of color and young Americans to turn Georgia blue, and her efforts have proved fruitful. In partnership with other organizations, Fair Fight and Abrams are credited with registering over 800,000 Georgia voters, which directly contributed to the Democratic lead in the 2020 presidential election. Abrams also created the New Georgia Project in 2014, which also aimed to register disenfranchised people of color to vote. Biden’s presidential win, along with the Democratic Congress flip as a result of Ossoff and Warnock’s victories, have been deemed impossible without Abram’s constant efforts to give historically shut-out citizens a platform to use their voice in the political arena.

An activist, political pioneer, and black woman, Stacey Abrams had redefined the image of a modern politician. Her successes in Georgia have put her at the forefront of national discourse and has given true grassroots-style grit a name to identify with.