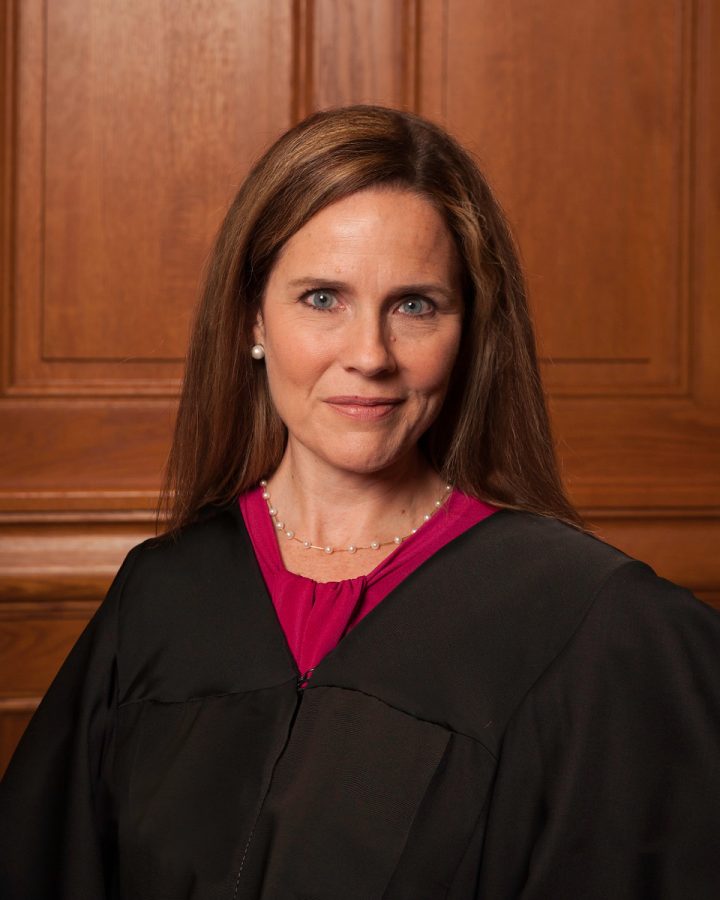 "File:Amy Coney Barrett.jpg" by Rachel Malehorn is licensed with CC BY 3.0. To view a copy of this license, visit https://creativecommons.org/licenses/by/3.0

Amy Coney Barrett, President Trump’s nominee to replace the late Justice Ruth Bader Ginsburg on the Supreme Court, has been confirmed by the Senate. Her staunch conservatism and Christian values have been at the center of a politically divisive conversation, which has called her credibility as a judge into question. Born on January 28, 1972 to Linda and Michael Coney, Barrett was raised in New Orleans, Louisiana and attended St. Mary’s Dominican High School. Barrett graduated from St. Mary’s Dominican High School in 1990, and went on to attend Rhodes College in Indiana, graduating in 1994 magna cum laude. Afterward, she continued her studies as a law student on a full scholarship to Notre Dame Law School, graduating summa cum laude and first in her class in 1997. Following her graduation from law school, Barret clerked for the late Associate Justice Antonin Scalia (whom she shares much of her judicial philosophies with), from 1998 to 1999. After her time clerking for Justice Scalia, Barrett worked for the law firm Miller, Cassidy, Larroca & Lewin in Washington, D.C. between 1999 and 2001 and was a fellow at The George Washington University Law School from 2001 to 2002. In 2002, Barrett received a position at Notre Dame’s law school and has taught at her alma mater for 18 years. Barrett is married to Jesse M. Barrett (a fellow graduate of Notre Dame law school) and they live in South Bend, Indiana with their seven children: Emma, Vivian, Tess, John Peter, Liam, Juliet, and Benjamin. Barrett and her husband adopted John Peter and Vivian from Haiti. In 2017, following Trump’s election, Barrett was nominated to the 7th US Circuit Court of Appeals. The 7th circuit’s jurisdiction encompasses Indiana, Illinois, and Wisconsin.

When Supreme Court Justice Anthony Kennedy retired in 2018, President Trump was given the chance to fill a second seat on the Supreme Court. While Trump considered nominating Barrett then, he ultimately decided to nominate Brett Kavanaugh. Kavanugh, although accused of sexual assault by Christine Blasey Ford and sexual misconduct by multiple other women, was confirmed by the Senate in October of 2018. When Justice Ruth Bader Ginsburg died in September of this year, President Trump spared no time before nominating Barrett. Barrett’s confirmation marks a historic moment in American history as she is the fifth woman to be confirmed to the Supreme Court. However, Barrett’s nomination to the Supreme Court also marks a divergence from a precedent set by Senate Republicans in previous years.

Following Justice Antonin Scalia’s death in February of 2016, President Obama nominated Merrick Garland to the Supreme Court in March of that year. Merrick Garland, Obama’s nominee, was liked by both Democrats and Republicans and agreed with Chief Justice Roberts, a conservative, on some issues. In an unprecedented move, Senate Republicans, led by Senate majority leader Mitch McConnel (R-KY), claimed that Scalia’s seat should remain empty because the Presidential election was nine months away, arguing “The Senate has a role to play here. The president nominates, we decide to confirm. We think the important principle in the middle of this presidential year is that the American people need to weigh in and decide who’s going to make this decision. Not this lame duck president on the way out the door, but the next president” and “The American people are about to weigh in on who is going to be the president. And that’s the person, whoever that may be, who ought to be making this appointment.” Obama was ultimately stonewalled and Garland’s nomination never progressed to confirmation hearings. Justice Ginsburg, who died on September 18, made it her dying wish that her seat on the court not be filled until after the election, stating “My most fervent wish is that I will not be replaced until a new president is installed”. However, soon after Ginsburg’s death, McConell and other Senate Republicans soon reversed the stance they took during the Obama administration and backed President Trump’s efforts to confirm a new Justice to the Supreme Court as soon as possible. McConnell was quoted saying “President Trump’s nominee will receive a vote on the floor of the United States Senate” and “Americans reelected our majority in 2016 and expanded it in 2018 because we pledged to work with President Trump and support his agenda, particularly his outstanding appointments to the federal judiciary.” While Democrats had hoped that more moderate Republicans such as Susan Collins (ME), Lisa Murkowski (AK),  Mitt Romney (UT), and Lamar Alexander (TN) would oppose the progression of Barrett’s confirmation so close to an election, they were, for the most part, disappointed. Both Susan Collins of Maine and Lisa Murkowski of Alaska stated that any vote to confirm a Supreme Court nominee should happen after the election. However, President Trump, backed by members of the Republican party, moved the confirmation hearings forward. Despite receiving sharp criticism from the Democratic party for their actions, the Trump administration and Senate Republicans stand by what they did and believe Barrett will bring new perspectives to the Supreme Court, as she is the only sitting justice who did not graduate from Harvard Law School or Yale Law School, is the mother of school-aged children, and has a child with special needs (Barrett’s youngest son, Benjamin, has down syndrome).

People of Praise is a religious group with 22 communities around the U.S. who worship, socialize, and exclusively consult each other based on their strict Catholic beliefs. In these communities, the lives of the members are tightly woven into one another. It is not an ordinary church, because there is no level of obscurity, therefore, children of the members get to choose if they wish to commit to the group for life. Commitment to the group involves abiding by the strongly recommended suggestions/decisions of the group leaders. A member stated that he was  “pressured first to drop out of college, then to give up a coveted internship and a semester abroad so he could devote himself to missionary work.” Another previous member, Dr. Wang, shares that he left the group after being a member for some time because “The social scene was extremely Republican, very much Rush Limbaugh.” A previous frequenter of the group’s church had considered commitment but revealed that she didn’t because “there was a strong sense of membership, of being ‘You’re in or you’re out.’” Despite the fervent rule of strong commitment, a reporter invited to visit one of the communities was “struck by the ‘staggering friendliness’ he encountered.” However, The People of Praise oppose abortion and do not accept members of the LGBTQ+ community. While Amy Coney Barrett’s direct position in the People of Praise is still unclear, she and her family have been affiliated with the group for decades and some fear that the group’s ideals may influence Barrett’s decisions on the Supreme Court.

Many are worried about Barrett’s confirmation to the Supreme Court, particularly those who support the Affordable Care Act (ACA). Passed in March of 2010 under the Obama Administration, the ACA provides affordable healthcare coverage to millions of Americans. Since the creation and passage of the ACA, Republican Senators have been outspoken about their disdain for it. President Trump has been adamant about his plan to repeal and replace the ACA since he first began running for political office. So far, President Trump has been unsuccessful in doing either. During Barrett’s confirmation hearings, Democratic Senators came down hard on Barrett, as she has previously expressed some disapproval of the ACA. The Supreme Court is expected to hear the case California vs Texas soon, which is centered upon the constitutionality of the ACA, making some people concerned that crucial statutes of the ACA will be struck down. While many have claimed that Trump nominated Barrett to the Supreme Court in an effort to deliver on a campaign promise, Barrett has been steadfast in her determination to serve the courts and country well, stating that she will now be a “pawn” to President Trump.

Barrett was confirmed on October 26 by the Senate. Susan Collins (R-ME) was the only Republican to vote against her nomination.. Sworn in on the evening of the Senate vote, Barrett reaffirmed her commitment to the American people and Constitution of the United States in her speech, marking the beginning of an era of conservatism on the highest court in the country.