Unsteady Ground: What Happens When a Leader is Compromised 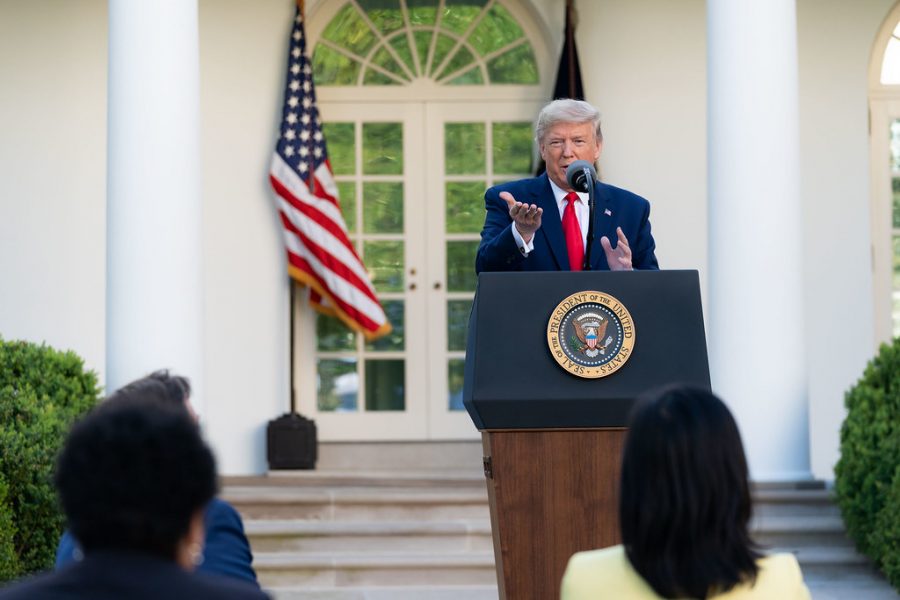 On October 2nd, the nation erupted with breaking news from the White House–the president had been diagnosed with COVID-19, and was admitted to Walter Reed National Military Medical Center in Washington that evening. This evoked a variety of reactions and emotions within the American people; some were entertained, others overjoyed, and many unsurprised. Opinions ranged from all sides of the political spectrum, yet one question dominated the discussion: what will happen next? The inevitable ripple effect of Trump’s diagnosis was predicted to take a great hold on the upcoming election, but in what way? As poll numbers continue to come in and the pandemic pushes on, the Commander-in-Chief has created a sentiment of uncertainty regarding the future of America–even the most protected figure in the country can’t avoid infection.

The recent aftermath of Trump’s medical complications has caused critical changes in the traditional debate format, and therefore holds the power to turn poll numbers on their head. In order to ensure the safety of Democratic candidate Joe Biden, moderator Steve Scully, and their audience, the second presidential debate was converted to a virtual format. While Biden agreed to participate, President Trump refused. After the former announced an alternate independent town hall, the latter scheduled his own event at the same time on separate networks. Such a change deprived Americans of another opportunity to witness a discourse between the two candidates, and forced undecided voters to choose between a single outlet of information. This unorthodox format may have an unknown long-term effect on the outcome of the 2020 election, as uninformed voters are still left with little information to choose between starkly different candidates.

Trump’s fitness for presidency has been called into question by figures in Washington, including House Speaker Nancy Pelosi (D), as his condition left many wondering if the 25th amendment would be invoked. Due to Trump’s COVID-19 diagnosis and heavy use of steroid treatments, Pelosi argues that “…there may be some impairment of judgment…” stemming from his current condition, which according to the 25th Amendment, should place Pence in power. His possible instability stems from the use of Dexamethasone, a steroid, which according to Dr. Meghan Rammey at Brown University, “is known to have mental health side effects. It can cause psychosis. It can cause delirium. It can cause mania.” Although it has the ability to decrease the intensity of COVID-19 symptoms, it can decrease immune system function and lead to organ damage.

The severity of Trump’s case was further cause for worry, as he received supplementary oxygen after his levels dropped, experienced high fevers the Friday morning  before he was moved to the hospital, and was put on an intensive treatment course, including doses of remdesivir. After leaving Walter Reed, the president’s doctor, Sean Conley, stated that he wasn’t “entirely out of the woods yet,” which reinforces concerns over whether he is in the right condition to remain in his position. This idea has been fiercely rejected by Republicans in Washington, as they continue to claim he is in fit shape to continue his presidential duties.

Just before his release from the Washington medical center, Trump tweeted the news of his discharge, and stated, “Don’t be afraid of Covid. Don’t let it dominate your life. We have developed, under the Trump Administration, some really great drugs and knowledge. I feel better than I did 20 years ago!” His declaration is misleading to the American public, as the standard of care he received is not widely available to COVID patients around the country. He is the first ever recipient of experimental steroid doses to treat the virus, making his short hospital stint unique for a case of such severity. Trump’s statements have sparked widespread concern within those who are aware of the grave dangers of COVID-19, as his words have the potential to disrupt the safety practices that protect at-risk populations around the country. Due to his one-of-a-kind speedy recovery, the president can use this survival story to back up his past claims of a non-threatening Coronavirus, pushing a narrative that downplays the effect of the pandemic on society.

This misstep is just an added layer to the president’s failure to adhere to social distancing and mask mandates, which continues to encourage carelessness as the pandemic death tolls continue to rise. Maskless rallies held by the Trump administration have been seen by many voters as a failure to hold American citizens’ safety to the highest standard, which has contributed to a left-leaning consensus that the pandemic has been mishandled since March. What is seen as one of the biggest presidential failures of all time will not only affect Trump’s ratings during the 2020 election, but could have major consequences in the foreseeable future.

Voters’ distrust in current leadership has already become evident within election statistics. As of October 15th, support for Joe Biden has jumped to 54%, according to NPR, while Trump has fallen to 43%. These stark numbers exhibit the slow creep towards the yearning for a different presidential future, which may have stemmed from Trump’s untimely diagnosis. The center of American power has been infiltrated, and the aftermath continues to play out in various forms. As November 3rd approaches, the ripples of the president’s experience with COVID-19 will determine the well-being of the American nation.

This article pulled upon coverage from NPR, CNN, and WebMD.

Image Credit: “President Trump Delivers Remarks During a Coronavirus Update Briefing” by The White House is marked under CC PDM 1.0. To view the terms, visit https://creativecommons.org/publicdomain/mark/1.0/