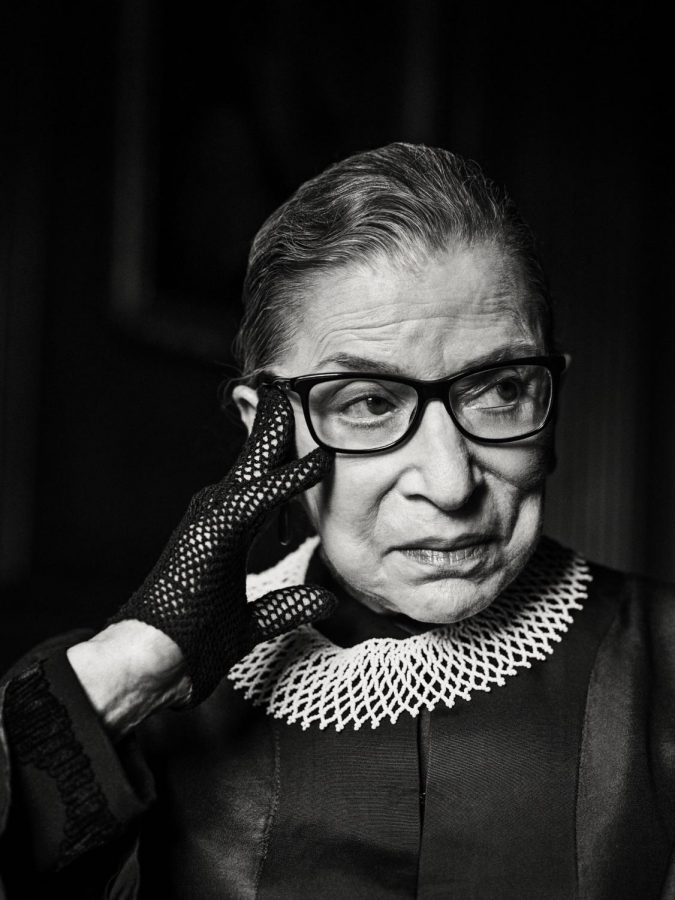 As many dwell on the loss of one of our nation’s greatest Supreme Court justices, we must remember to recognize and celebrate Ruth Bader Ginsburg’s marvelous triumphs. From a challenging early life, to groundbreaking legal cases, and a legacy that will perennially prevail, Ginsburg’s diligence and tenacity in the face of hardship serves as a necessary reminder of the power of dissent.

Ginsburg was born as Joan Ruth Bader on March 15, 1933, to her parents, Celia Amster and Nathan Bader, in the Brooklyn neighborhood Flatbush. Ginsburg’s parents arrived in New York at a young age and later came to own a handful of retail stores, living paycheck to paycheck. Despite the family’s precarious financial standing, Ginsburgs’s mother fervently taught her daughter to be ambitious. Unfortunately, Ginsburg’s mother passed away the day before her graduation, unable to witness Ginsburg’s tremendous successes. Ginsburg then went on to attend Cornell University on a scholarship, which was rare for a woman of her time. Though she faced many adversities in college, Ginsburg never failed to excel and exceed her classmates’ expectations, and she was ranked first in her class. While at Cornell, she met Martin Ginsburg, who she married soon after graduation. Soon after, Ginsburg enrolled at Harvard Law School to continue her studies, all while caring for her first daughter. Around this time, Ginsburg’s husband developed testicular cancer, and Ginsburg decided to take notes and attend lectures for him so that they could graduate together. Ginsburg finished her degree as a transfer student at Columbia Law. Then, her search for a job began.

Initially, Ginsburg was rejected from every New York law firm she applied to on the basis of her gender. After a recommendation from one of her mentors, Ginsburg began to clerk for federal district judge, Edmund L. Palmieri. After two years, Ginsburg returned to Columbia to take part in a comparative law project on civil procedure, which required her to work in Sweden, where the feminist movement was thriving. After returning to the US, Ginsburg was hired to teach at Rutgers Law School, while simultaneously volunteering to work on discrimination cases for the American Civil Liberties Union (ACLU). An old friend of Ginsburg’s, who happened to be the national legal director of the ACLU, began to usher more cases to her management.

Ginsburg worked on the Reed v. Reed case in 1971, which would eventually make it to the Supreme Court. There was a law in Idaho that overtly denied the selection of women as administrators of estates due to preconceived notions of inferiority. The state defended this prejudice against women, claiming that women were not as knowledgeable in the field of business as their male counterparts. In her 88 page filed brief, Ginsburg described how this law reinforced the longstanding societal oppression of women. After delivering a passionate address and presenting her 88 page brief, Ginsburg successfully won her first Supreme Court case. Ginsburg’s work on the Reed v. Reed case became known as the  “grandma brief”,  as it served as a reference and inspiration for future feminist lawyers.

After being appointed to the Supreme Court in 1993 by President Bill Clinton, Ginsburg ardently continued to advocate for gender equality. The 1996 Supreme Court case of United States v. Virginia demonstrates just that. The male-only admittance policy at the Virginia Military Institute was challenged in United States v. Virginia, and a 7 to 1 ruling established that sex discrimination within the college admissions office was unconstitutional. After the institute created a separate training regimen specifically for women, Ginsburg famously responded “Generalizations about ‘the way women are,’ estimates of what is appropriate for most women, no longer justify denying opportunity to women whose talent and capacity place them outside the average description.” Ginsburg finalized her remarks on this case by stating that there evidently are differences between men and women. However, once their differential treatment begins to perpetuate inequality, it becomes unconstitutional.

Various victories for the feminist movement exist within the catalog of Ginsburgs’s argued cases. Ginsburg not only convinced her predominantly male audiences of the sex discrimination that continues to prevail, but also became a role model for all women, and a central figure of the feminist movement. Ginsburg’s industrious dissent and the manner in which she addressed issues of gender equality has certainly inspired various women to take a similar approach, and it has encouraged many to push the boundaries of societal norms . In this way, Ruth Bader Ginsburg entrusts us with her ambitions, her determination, and her legacy, which will aid in the long, challenging process of change that accompanies the fight for equality.