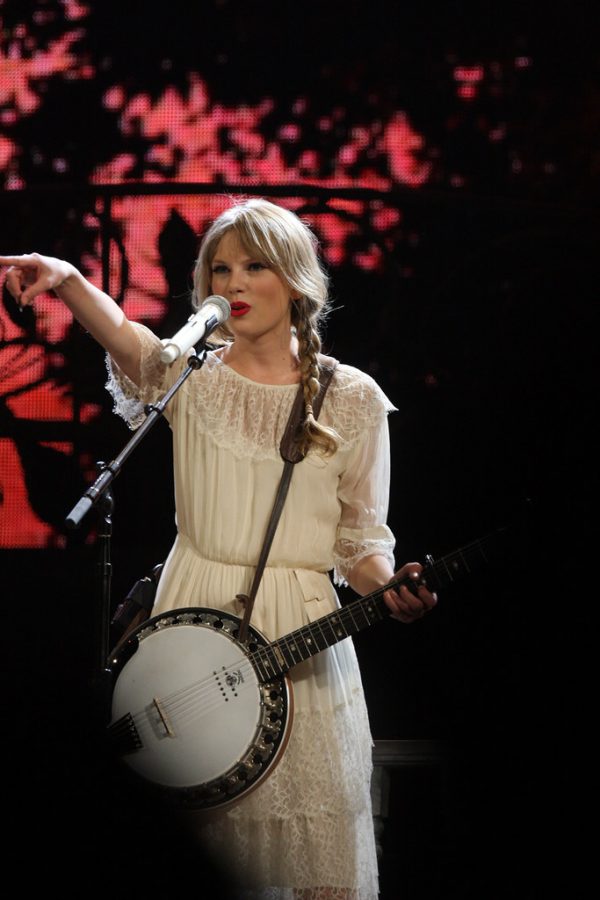 Just seven months after the release of her groundbreaking album folklore, Taylor Swift is back with its companion album— evermore. folklore, with its emphasis on storytelling rather than creating pop radio hits, was out of the box, creative, and unlike anything the world had ever seen from Swift. The blend of soothing, melancholy, and upbeat songs on the album captured moments and details of a life and stories worth telling, much unlike the vapid content of many pop songs of today. folklore, with its allusions to Swift’s dreams, anger, love, and personal growth, veils scenes from Swift’s own life beneath the surface of each song. The mixture of more downbeat, somber songs and upbeat songs made for a balanced album, a balm of sorts to the ears and soul in the darkness of a pandemic.Since the release of her debut album in 2006, Swift has evolved greatly as an artist. Red was country and pop, an innovative crossover that gave us iconic songs of the 2010s. 1989 was a pop mega-hits album. Reputation was self-conscious and almost angry, picking apart every detail of identity and Swift’s life at that moment. Lover was much lighter, the product of a happier time in Swift’s life.

evermore sets itself apart from Swift’s past works as she immerses herself into characters, plot, and details of her story further, giving herself, her audience, and collaborators Aaron Dessner of The National, Jack Antonoff, William Bowery (Joe Alwyn, Swift’s boyfriend), and Justin Vernon some closure on the work that started with folklore. While Swift retains parts of her “indie” sound on the album, she also expands on the genre, mixing in country music and variations of pop. As Swift aptly said on an Instagram post announcing the album, “In the past, I’ve always treated albums as one-off eras and moved onto planning the next one after an album was released. There was something different with folklore.” folklore, by virtue of its powerful storytelling along, was very deserving of a sequel of sorts. Swift, as creative and innovative on her latest album, taker her listener deeper into the forest of music and storytelling, offering a brief, but altogether wonderful, reprieve from the monotony of life under lockdown with evermore. Here are my thoughts on each song:

The lead track on the album is a trademark Taylor Swift love song. However, “willow” also contains details about wanting somebody and almost “casting a spell to make somebody fall in love with you” as Swift said in a YouTube chat. “willow” has a pretty, soft guitar plucking as the only accompaniment to her lyrics. Lyrical highlights Swift’s sly “But I come back stronger than a ‘90s trend.”

The storytelling Swift weaves into this story is vibrant. Over a low-key instrumental that starts with piano, then guitar, and a chorus of back-up vocals, she layers the story of a narrator who rejects a proposal from her partner and immediately gets crucified for it, falling under the stigma of mental illness. The title itself is an idiom, usually reserved for “rich people problems”, but here it purposely serves to underscore the narrator’s mental health struggles. A common pattern that is observed in a society where women’s mental health is often invalidated as “hormones” and “craziness”. The lyrics have subtle references to folklore like, “‘This dorm was once a madhouse’/I made a joke, ‘Well, it’s made for me’” which is a reference to “madwoman” and connects the theme of women being stigmatized.

This song is all about longing and wanting someone so beautiful, so wonderful, and that everyone wants them. It describes the relationship the narrator has with this beautiful person and describes them as a “gold rush” or someone everyone runs to. In the end, the narrator and the person end their relationship, but the imagery is stunning, written over a sound similar to chamber-pop.

Like folklore, Swift does have connected songs in the album. This one connects to “dorothea” and is about Dorothea reconnecting with an old ex for a fling while she’s in town for the holidays. While “dorothea” is from the perspective of the fling, this one is from the perspective of Dorothea herself. Over guitar and some lower strings, she tells the story beautifully.

“tolerate it” features stunning piano throughout. Swift’s vocals have a wide range in this song, she goes slightly into a higher register but comes back down. The lyrics are profound and tell the story of giving love to someone who doesn’t care or doesn’t appreciate it, they just tolerate it.

In my opinion, this is the top track of the album. This is the most country Swift has sounded in the past eight years and is a collaboration with her long-time friends Danielle, Este, and Alana Haim of HAIM. The song is inspired by Swift’s love of true crime podcasts with details that allude to specific cases, such as the Papin Sisters case in 1933. Swift borrows Este’s name in the song, and the song is an addition to the collection of country revenge songs from the likes of Miranda Lambert, Carrie Underwood, and The Chicks. The lyrics contain references and notes on her relationship with Este (including her favorite restaurant: Olive Garden). The song is also part of a mini-series of crime songs within the album along with “marjorie” and “dorothea”.

The title is deceiving. But the song is incredibly written and it packs so much emotion into five minutes. The instrumental is barely there, giving the spotlight to an emotion that isn’t Swift’s but of a character mourning the end of something special. It was the last song written on the album.

This song might be the most aesthetically pleasing on the album. The instrumentals, mostly guitar and some drums, only add to the nostalgic feel of the song and the narrator’s yearning for Dorothea. Swift has mentioned that she believed Dorothea went to the same high school as James, Betty, Inez, and “Augustine”, who were some of the characters found in folklore.

“coney island” is the apology Swift wishes she got from her exes. It’s conversational, going back and forth, apologetic and regretful. It could also be the apology to “tolerate it”. The instrumental is the signature of The National, somber, and almost melancholy. Dessner who is part of the band played a large role in this album and the last one, so this song is special to Swift.

Here is another song about infidelity much like “illicit affairs” and “august”. However, those songs took on different tones than this one. This song has strong folk elements and feels more positive and healthy than the others. The banjo and picked guitar compliment the lyrics perfectly.

“cowboy like me” features country elements and tells the story of a rather unconventional love story, complete with a materialistic narrator and backing vocals from Marcus Mumford, who Swift is a fan of.

The most autobiographical song of the entire album is the most upbeat. It recounts one of the lowest points in Swift’s career: the Kanye West drama in 2016.

Track 13 is always very special to Swift because the number is special to her. This track is an ode to her opera singer grandmother, Marjorie Finlay, who was one of Swift’s biggest cheerleaders. This song manages to be so sweet yet so devastating in terms of the emotion and passion Swift’s voice holds. Finlay is heard as the backup vocals in this song.

This song might defy the genre that Swift is commonly associated with. It has a piano, but electronic touches and synthesizing, yet it’s also folk. The time signature is also unconventional and keeps you on the edge of your seat.

Swift’s second collaboration with Bon Iver is more than Swifties could have ever dreamed of. Mental health is the focus of Swift’s title track, a charming ballad about healing that is stunning and honest on all levels.

Honest and substantive, evermore does not disappoint. With her impressive lyricism and immersive atmosphere created by pushing the boundaries that define genres, Swift has created a masterpiece of an album that must certainty be listened to.